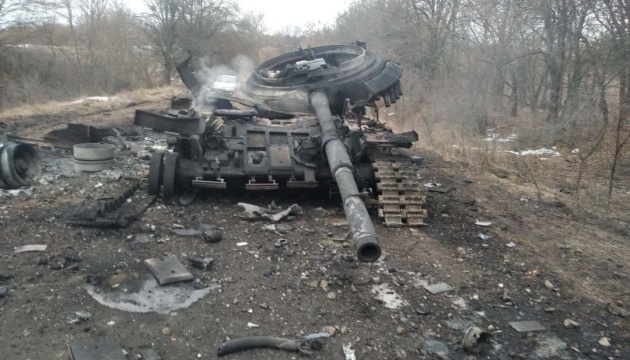 The main efforts of the aggressor are focused on cordoning off Kyiv and weakening resistance in the blockaded populated areas. Enemy forces are blocked and stopped in the Makarov area. The aggressor dropped back from Bucha and the Hostomel airfield.

In the fighting for Hostomel, at least 50 Russian military personnel from the 31st Separate Guards Air Assault Brigade (from Ulyanovsk) were killed.

On the Ukrainian side, soldiers of the special forces of the Main Directorate of Intelligence of the Ministry of Defence, the 3rd Separate Special Purpose Regiment named after Prince Svyatoslav the Brave and local resistance groups took part in the battles. The town of Hostomel is under the control of Ukrainian forces. This town is a strategic suburb of Kyiv. An airfield is located there, and the aggressor sought to take control of it for landing troops and supplies. The defeat at Hostomel disrupted the Russian Federation’s plans to encircle Kyiv.

Major cities in northern Ukraine such as Zhytomyr and Chernihiv are under severe attack. Pursuant to Article 57 of the 1977 Additional Protocol to the 1949 Geneva Conventions, military operations must take into account the protection of the civilian population, civilians and civilian objects. Russia’s actions violate the laws and customs of war and can be classified as war crimes, as one of the basic principles of international humanitarian law is the principle of distinction. The parties to the conflict should distinguish between the civilian population and combatants and between civilian objects and military objectives and accordingly direct their operations only against the latter (Article 48).

On March 4, the aggressor bombed the Korosten railway depot. School № 25 in Zhytomyr was also hit by a missile from Belarus, and almost the entire building was destroyed.

At about 08:15, the aggressor launched an attack in the direction of the city of Enerhodar, where the largest nuclear power plant in Europe is located. Russian troops opened fire on the nuclear power plant, causing a fire in the training building. At present, the Zaporizhzhia NPP site is under partial control of Russian Armed Forces troops. These armed formations (so-called Kadyrovtsy, or Kadyrov followers) are particularly brutal, and their control of Europe’s largest nuclear power plant poses a significant danger. It should be noted that it is the second NPP under the control of the Russian aggressor, the first one being the Chernobyl NPP. The seizure of such facilities directly violates Article 56 of 1977 Additional Protocol to the 1949 Geneva Conventions.

The building of the PivdenHydroMash plant in Berdyansk was seized by force. The regular guards have been displaced from the area. Currently, the plant and the administrative building are under the control of Russian forces.

The Armed Forces of Ukraine recaptured the Kulbakino military airfield from Russian invaders in the Mykolaiv region. However, the defense of the city continues in the vicinity of Mykolaiv.

Kharkiv continues to hold the defense against the aggressor firmly. The Armed Forces of Ukraine eliminated the Grad missile launcher located in Russkiye Tishki behind Cirkuny, that carried out enemy shelling on the largest residential community of North Saltivka microdistrict. There are no strategic or military facilities in this area of Kharkiv. By attacking civilians, Russian servicemen are committing war crimes.

Russian troops use high-explosive bombs against Ukrainian civilians. Employees of the State Emergency Service of Ukraine found and defused an undetonated FA-500 high-explosive bomb of the Russian Armed Forces. These bombs are designed to destroy hard shelters and are capable of destroying a residential building. This is further proof that Russia is resorting to terrorist methods of warfare, shelling civilians to spread panic.

The Russian Air Force continues to wreak havoc. Today, in the skies above Volnovakha, air defense units shot down another enemy Su-25 attack aircraft. The plane was bombing civilian housing and civilian infrastructure. The pilot ejected and is under search now. A Russian MI-8 helicopter carrying out a rescue mission for the SU-25 pilot was also shot down.

In the near future, the enemy is expected to launch a complex and large-scale fake news hit job, which will be carried out using the entire spectrum of modern information means. According to the AFU General Staff, the command of the Russian forces is aware that the “blitzkrieg” tactic has suffered a shattering debacle and at the moment the main task before the Russian Armed Forces is to conduct information and psychological special operations. An example of such an operation is the planned holding of a pro-Russian rally in Kherson in order to disorient the population and demonstrate alleged support for the invading actions of the Russian Federation. For this purpose, people from Crimea are brought to the city to come to the rally. About 60-80 Crimean actors for the crowd have already been accommodated in the Fregat Hotel.

Also, Russian troops temporarily holding Kherson were spreading a fake that President Volodymyr Zelenskyy had left Ukraine. The purpose of this information operation is to mislead the population and suppress resistance.

Russian television is already running propaganda for children in the form of cartoons, where the main characters are Vanya and Mykola as Russia and Ukraine. This is another example of the Russian Federation’s propaganda machine influencing audiences of different age categories.

During the night of March 3 to 4, the Zaporizhzhya nuclear power plant in Enerhodar was shelled and seized by Russian troops. They control the administrative buildings and the passage to the plant. Despite this, the power system is working stably.

Enerhodar was left without heat supply. During shelling of Zaporizhzhia NPP by Russian occupants, the heating main was broken. There were also problems with water and electricity supply. Three National Guardsmen were killed in Enerhodar. At 06:20, the fire in the training building of the Zaporizhzhya NPP in Enerhodar was extinguished.

In Mariupol, people are begging for help for residents who have been under fire for 5 days without water, light and heat.  Housing infrastructure is being destroyed by  grad, howitzers, and aircrafts.  The civilian population is running out of food and medicine, and 300 people have already been injured and they are in hospitals.  Doctors are fighting for the life of every Mariupol resident for 9 days.  Despite this, Russian troops are shelling even hospitals.

Russian aircraft dropped a bomb on Okhtyrka CHP.  The city was left completely without light, water and heat.

In Zhytomyr, the aggressors struck at the school.  And in Korosten, the Russians bombed a railway depot.

The Red Cross will act as a neutral mediator to help ensure the safety of citizens who will be evacuated from places where hostilities are taking place.

The Ukrainian authorities sent 19 trucks with the most necessary items to the Kherson region.  However, the Russian military did not allow humanitarian aid, instead they offered civilian assistance from Russia.  The promised agreements on the creation of a “humanitarian corridors” in the second stage of negotiations were not met.

The world community has expressed concern over the shelling and seizure by the Russian occupation forces of the Zaporizhzhya NPP site in the city of Energodar.  Due to the threat of a nuclear catastrophe, Zelensky held talks with international partners, including the Presidents of the United States and Poland, the Chancellor of Germany, the Prime Minister of the United Kingdom, the President of the European Council, and the International Atomic Energy Agency (IAEA).  The entire international community condemns the irresponsible actions of the aggressor.

NATO’s emergency meeting in Brussels on March 4 raised the issue of establishing a no-fly zone over Ukraine, but the Allies did not agree.  NATO has not changed its position and will not send its forces to Ukraine, said NATO Secretary General Jens Stoltenberg.  Instead, Ukraine was admitted to the NATO Joint Cyber ​​Defense Joint Technology Center as a contributor.  Ukraine’s participation in the Center’s work will strengthen the exchange of cyber-experiences with other participating countries.

The Swiss government has banned the supply of goods to Russia, for defense and security, as well as the export to Russia of goods for the oil, aviation and space industries.  It is also forbidden to provide state funding or financial assistance for trade or investment in Russia.

Financial assistance from international partners and institutions is important.  Sweden has sent 500 million kroons ($ 50.5 million) to support the Armed Forces of Ukraine.  The European Investment Bank has agreed to provide 668 million euros in financial assistance to Ukraine immediately.  The funds should help deal with the damage caused by the war and the influx of refugees.

The world continues to respond to Russia’s aggressive actions on the territory of Ukraine, Russia’s international isolation continues:

– The Danish brewery Carlsberg Group has decided to immediately stop new investments in Russia, as well as exports from other Carlsberg Group companies to the Russian company Baltika.

– Cisco, a company that makes network hardware and software, has stopped working in Belarus and Russia.

– American IT company EPAM closes its Russian office, ceases to serve Russian customers and allocates $ 100 million to Ukrainian employees and their families.

– Microsoft temporarily suspends the sale of goods and services in Russia.

– The largest Japanese and one of the world’s leading electronics manufacturers Panasonic expressed solidarity with Ukraine and decided to suspend operations with Russia.

– The largest VPN-services responded to the request of the cyber police to stop cooperating with the aggressor.  Services KeepSolid, ProtonVPN, Windscribe filter traffic and block Russian propaganda sites.  In addition, these services transfer up to 30% of their own revenues to the needs of the Ukrainian army.

– Airbnb online service suspends all operations in Russia and Belarus.

– One of the largest backbone providers of the American company Cogent disconnects Russian operators from its networks.

The European Commission is suspending research cooperation with Russia, and no new contracts or agreements will be signed with Russian organizations under the Horizon Europe program.  The European Union has also suspended cross-border cooperation programs with Russia and Belarus.  The suspension of relations affected nine programs, as well as the transnational program Interreg of the Baltic Sea Region.

The UN Human Rights Council has voted in favor of a resolution condemning Russia’s human rights abuses during its invasion of Ukraine and setting up a commission to investigate the crimes.  Russia and Eritrea voted against the resolution.  The Commission of Inquiry is one of the strongest tools available to bring to justice serious human rights violations.  The findings of the commission of inquiry can lead to political sanctions and assist the competent authorities in investigating and prosecuting criminals.