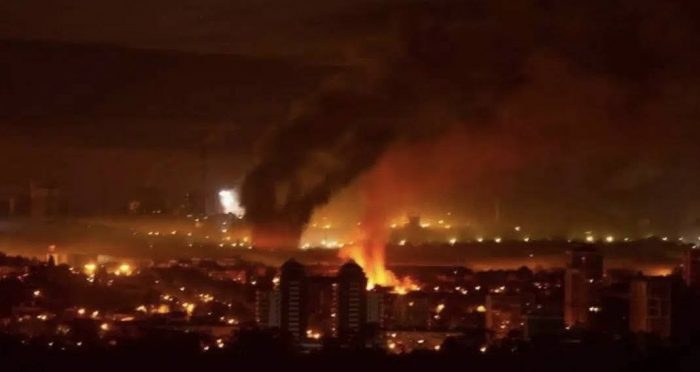 The Ukrainian Armed Forces have broken through the Russian defense line in the north of the Kherson region and as a result of a successful offensive have liberated part of the region. This poses a threat to the entire Russian grouping located on the right bank of the Dnipro River. In parallel, there is a counteroffensive by Ukrainian troops near the administrative border of Kharkiv and Luhansk regions.

The Russian troops are still unable to form a stable line of defense in these areas and are forced to retreat. At the same time, they continue to launch missile strikes on Ukrainian territory. In addition, kamikaze drones obtained by Russia from Iran are being actively used.

After the liberation of Lyman, the Armed Forces of Ukraine continue their offensive in the direction of the Svatove-Kreminna frontier, located in the north of the Luhansk region. The advance of Ukrainian troops sets the stage for the liberation of the northwestern part of the region, in particular, the Sievierodonetsk-Lysychansk-Rubizhne agglomeration. It is already known that control over several settlements in Luhansk region has been restored.

The Russian Federation troops have significantly limited their offensive operations in an attempt to hold the front line. Local attacks on Ukrainian positions continue near Bakhmut and Avdiivka.

Intense shelling of the Donetsk region by Russian forces is ongoing, which leads to the destruction of civilian infrastructure and casualties among civilians. During October 3-5, at least 6 civilians were killed and 11 were wounded in the Donetsk region.

The Ukrainian Armed Forces continue counteroffensive operations in the east of the Kharkiv region, which are aimed at its final liberation. Ukrainian units are advancing from a bridgehead on the left bank of the Oskil River in the northern direction. A number of villages in the Izium district of Kharkiv region are reported to have been liberated, which opens up opportunities to develop an offensive in the direction of Svatove in Luhansk region.

The shelling of Zaporizhzhia by the Russian military continues. In the morning of October 5, an attempt was made to launch a missile strike on the city, using Iskander missiles. One missile was shot down by air defense forces. On the night of October 6, residential buildings in Zaporizhzhia were also struck. Information about its consequences is being clarified. In addition, on October 5 there was a strike on Huliaipole, at least 2 people were killed.

Ukrainian forces broke through the front line in northern Kherson region, forcing Russian troops to retreat toward the Kakhovka hydroelectric power plant. As a result of the offensive in the Kherson direction from October 1 to 5, the AFU managed to liberate an area of more than 1.3 thousand square kilometers. The successful offensive of the AFU poses a threat to the entire Russian grouping in the area, which is secured through bridges and crossings under the fire control of Ukrainian artillery.

The shelling of the territory of the Dnipropetrovsk region continues. In particular, in the morning of October 3, the suburbs of Dnipro were hit by missile attacks. More intensive strikes are carried out by Russian troops in the areas of Nikopol and Marhanets on the Dnipro River coast. The shelling here is carried out from the left bank of the river – from the area of temporarily occupied Enerhodar and Zaporizhzhia NPP.

On the night of October 5, Russian troops launched a massive attack on Ukrainian territory using kamikaze drones. According to the Air Force of the Armed Forces of Ukraine, the anti-aircraft defense forces managed to shoot down six UAVs. Several drones were used to strike the town of Bila Tserkva in the Kyiv region. As a result, the buildings of a military unit were damaged and 1 person was injured.

There is also continued shelling of the border areas of Chernihiv and Sumy regions from Russian territory.

The Office of the UN High Commissioner for Human Rights has updated data on civilian casualties resulting from the full-scale Russian invasion of Ukraine. As of October 3, the confirmed casualties are 15,246 (6,114 dead, 9,132 wounded). According to the Office of the Prosecutor General, as of the morning of October 5, as a result of the armed aggression of the Russian Federation in Ukraine, the number of affected children increased to 1,205 (418 children killed, 787 wounded). According to the government platform Children of War, as of October 3, 7,992 children had been deported and 236 were missing.

Ukrainian Prosecutor General Andrii Kostin reported that some 37,000 cases of Russian war crimes have now been registered, and more than 600 suspects have been identified. He noted that his office investigates three types of crimes: the crime of aggression, war crimes and the crime of genocide.

Law enforcers continue to record crimes committed by the Russian military in recently liberated territories. In Kharkiv region, the mummified bodies of 2 men were found in one of the basement rooms of a destroyed house. The circumstances of their deaths are being investigated. In addition, the police exhumed the bodies of 2 more civilians who, according to preliminary information, had been tortured by Russian special forces. Similar facts are recorded in the Donetsk region. In the recently liberated town of Lyman, more than 50 unidentified civilian graves were found. Also, the bodies of 4 murdered civilians were exhumed in Sviatohirsk (Donetsk region).

The problem of mines remains particularly acute, especially in the de-occupied territories of Ukraine. According to demining experts, it may take at least ten years after the end of active hostilities for the threat to be completely eliminated. The Russian military mines occupied territories in a chaotic manner, using anti-personnel and anti-tank mines, booby traps, and improvised devices.

On October 5, Russian President Vladimir Putin signed a decree on the so-called “taking into federal ownership” of the Zaporizhzhia nuclear power plant seized by Russian troops. In response, the Ukrainian Foreign Ministry condemned the illegal takeover of the Zaporizhzhia nuclear power plant by the Russian Federation, which is considered a crime that increases nuclear safety risks and threats. Rafael Grossi, head of the IAEA, indicated that the situation at the plant continues to be extremely precarious. The Russian military released the abducted station director, Ihor Murashov; he was transferred to Ukrainian government-controlled territory. Consequently, it is not yet definitively known how effectively the facility is managed.

Minister of Culture and Information Policy Oleksandr Tkachenko noted that Russia’s full-scale invasion of Ukrainian territory entails serious destruction of civilian objects, in particular religious and cultural institutions, cultural heritage sites. UNESCO World Heritage sites are under the threat of destruction. As of the end of September 2022 the Ministry has documented more than 500 episodes of Russian military crimes against the Ukrainian cultural heritage.

According to Minister of Ecology Ruslan Strilets, the Russian full-scale invasion has caused $35.3 billion worth of damage to Ukraine’s ecology. The Ecology Ministry estimates that the damage due to air pollution caused by Russia’s war against Ukraine is now about €25 billion; and another €11.4 billion is needed to repair the damage to soils.

International partners continue to provide financial support to Ukraine to close immediate liquidity needs. On October 3, the EU and Ukraine signed a Memorandum of Understanding regarding the future provision of €5 billion in macrofinancial assistance, and Ukraine should receive its first tranche in mid-October. This is the second part of the 9-billion-euro EU macrofinancial assistance package for Ukraine, which was announced by the European Commission back in April.

President Volodymyr Zelenskyi submitted to the Verkhovna Rada a request to dismiss Kyrylo Shevchenko from the post of the head of the National Bank of Ukraine. Shevchenko held the post since July 2020 and resigned due to health reasons. The main contender for the post is called the former chairman of the board of Oshchadbank Andrii Pyshnyi.

Deputy Economy Minister Taras Kachka informed that Ukraine’s exports of goods in September exceeded $4 billion for the first time since the outbreak of full-scale war. The negative balance of trade in goods in September has decreased 3 times – to $354 million compared to $1.05 billion in August.

In response to persistent nuclear blackmail, the threat of escalating war and attempts to annex Ukrainian territories, the European Union has provisionally approved a new package of sanctions against Russia. The eighth package expands the list of restrictions on products that may contribute to the military and technological strengthening of the Russian Federation or the development of its defense and security sector. The new sanctions expand the ban on imports of steel and steel products, wood pulp and paper, machines and devices from Russia. In addition, maritime transportation of Russian oil to third countries at prices exceeding the established oil price limit is prohibited. European Commission President Ursula von der Leyen welcomed the agreement of EU member states on a new package of sanctions against Russia.

Ukraine’s president continues dialogue with international partners to strengthen their support. Volodymyr Zelenskyi had a telephone conversation with U.S. President Joseph Biden. The discussions focused on the situation on the frontline, the strengthening of sanctions against Russia, the importance of the grain initiative and the implementation of joint international activities. The Ukrainian president also held talks with Indian Prime Minister Narendra Modi and the future head of the Italian government, Giorgia Meloni, discussing possibilities for bilateral cooperation.

Ukraine remains active on the path of Euro-Atlantic integration. President Volodymyr Zelenskyi discussed with NATO Secretary General Jens Stoltenberg the coordination of the state’s further steps into the North Atlantic Alliance. So far, 11 countries have publicly supported Ukraine’s application for membership of the organization. In turn, according to opinion polls, in case of a referendum on Ukraine’s membership in NATO, this initiative would be supported by 83% of Ukrainians, which is the largest historical indicator.

To broaden support for Ukraine among countries of the Global South, Foreign Minister Dmytro Kuleba began a tour of Africa on October 3, the first in the history of Ukrainian diplomacy. The minister held meetings with Côte d’Ivoire’s Minister of Foreign Affairs, African Integration and Diaspora Kandia Camara and Senegalese Minister of Foreign Affairs and Senegalese Abroad Aïssata Tall Sall. The main topics of talks were building a quality partnership and enhancing cooperation in digitalization, trade, agriculture and education.

Ukraine is in the process of cleansing its state institutions of Russian agents and bringing to justice those involved in subversive activities in the interests of the Russian Federation. Based on the materials of the State Bureau of Investigation, Renat Kuzmin, MP of the Opposition Platform – For Life party, was issued a suspicion notice on high treason charges. The powers of deputy chairman of the Supreme Court Bohdan Lvov were terminated due to his having a Russian passport.