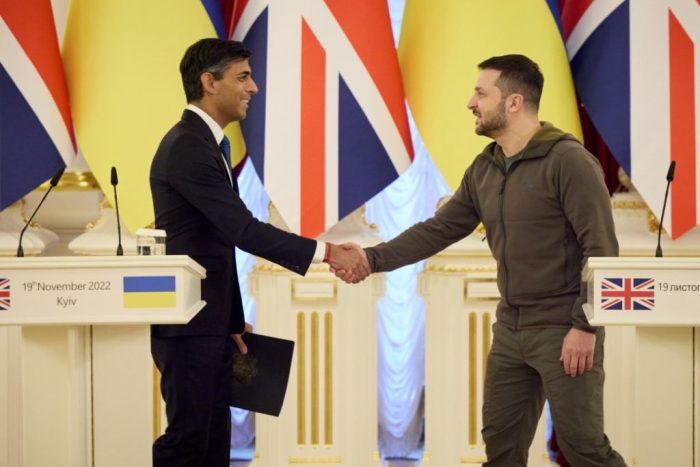 The front line remains stable. In the south it now runs along the Dnipro River, which complicates offensive operations for the parties. In the east, fierce fighting continues near Bakhmut and Avdiivka. Russian command is redeploying additional forces from Kherson direction to Zaporizhzhia and Donetsk regions. Intense exchange of artillery strikes continues along the frontline.

Russian troops keep launching missile attacks on critical infrastructure facilities of Ukraine. About 50% of the equipment of the Ukrainian energy system has been damaged starting from October. Since November, Russia has also been attacking thermal and gas production infrastructure.

Intense fighting continues in the area of Svatove-Kreminna and on the outskirts of Lysychansk. Ukrainian Armed Forces are shelling logistics facilities of Russian troops near Starobilsk.

Heavy combat actions are going on in the area of Bakhmut and Avdiivka in the Donetsk region, but Russian troops are unable to break through the Ukrainian defense. Due to the deteriorating weather conditions, the number of attacks decreased, but the amount of shelling of Ukrainian troops’ positions increased – more than 400 attacks on November 20 alone.

As a result of shelling on the territory of Donetsk region over the period of November 17–20, 2 people were killed and 12 were wounded.

Russian troops continue shelling the territory of Zaporizhzhia region. On the night of November 17, at least 10 people were killed in the town of Vilniansk as a result of a rocket attack. On the night of November 18, Russian troops again attacked the territory of the region, using S-300 systems. In the evening of November 18, another strike was made on an infrastructure facility in Zaporizhzhia. As a result, at least 1 person was killed and heat supply to 123 multi-storey buildings was suspended.

On November 19-20, the IAEA recorded a powerful rocket attack in the area of Zaporizhzhia NPP. Director General of the Agency Rafael Grossi informed about another violation near the nuclear facility that threatens its safety.

Ukrainian military strike at the places of concentration of Russian troops in different parts of the frontline.

Ukrainian Armed Forces strike at the locations of Russian troops on the left bank of Dnipro River. It is reported that the area of their deployment in the town of Skadovsk and on the Kinburn Spit was hit.

In turn, Russian troops are shelling the recently liberated territories of Kherson region on the right bank of the Dnipro. As a result, at least 1 person was killed and 5 people were wounded in recent days.

Russian missile attacks in recent days have caused significant damage to Ukraine’s energy grid. According to Prime Minister Denys Shmyhal, up to 50% of the country’s power grid is out of commission. DTEK Executive Director Dmytro Sakharuk said that the destruction could lead to a significant limitation of electricity supply to consumers. The head of the Verkhovna Rada Committee on Finance, Taxation and Customs Policy, Danylo Hetmantsev, estimated the damage from the latest strike at up to $1 billion.

In addition to missile attacks, Russian troops continue shelling of border and frontline towns on the territory of Ukraine. On November 19, 2 people were injured in Kharkiv region as a result of shelling. Moreover, shelling of Nikopol and Marhanets (Dnipropetrovsk region) from the left bank of the Dnipro River is ongoing. Shelling of the border areas of Sumy region does not stop.

According to the executive director of the Center for Civil Liberties Oleksandra Romantsova, since the beginning of the full-scale invasion Russia has abducted or taken from the territory of Ukraine more than 20 thousand people – both combatants and civilians.

The process of prisoner exchange is underway. On November 19, 3 servicemen of a separate marine battalion of the Ukrainian Navy were released from Russian captivity.

The Ukrainian side reports evidence of large-scale crimes committed by the Russian military in Kherson region. In the recently liberated Kherson the authorities found “torture chambers” where dozens of people were tortured. According to eyewitnesses, Ukrainians were beaten with electric shocks and metal pipes before being killed. Human Rights Ombudsman Dmytro Lubinets noted that Russian military kept teenagers in a separate cell. Representatives of the National Police also report the discovery of 25 Russian torture chambers in the liberated territories of Kharkiv region.

According to Prosecutor General Andrii Kostin, over 700 bodies have been found in the de-occupied territories of Kharkiv, Kherson and Donetsk regions over the past two months, almost 90% of them are civilians.

Law enforcement officers continue to record war crimes in Kherson region. In one of the villages of Kherson region, Russian military shelled a humanitarian point during the distribution of bread, which injured 5 people. Law enforcement officers also inspected the crime scene committed by the Russian military in April 2022. It was established that during the seizure of one of the villages in Kherson district, Russian servicemen shot 7 people, including a minor child. Also, the Kherson Regional Prosecutor’s Office found the burial place of 2 bodies. According to preliminary data, the people were killed as a result of an artillery strike on the village in September by Russian servicemen.

The investigation of war crimes is also conducted by Lithuania. Lithuanian prosecutors have interviewed more than two thousand Ukrainian citizens temporarily residing on Lithuanian territory. More than 30 Ukrainians received the status of victims.

The mine threat remains relevant in the de-occupied territories of Ukraine. On November 18, a car hit a mine near the town of Beryslav, Kherson region, killing and injuring civilians. In Mykolaiv region, several people exploded on mines, and a representative of the National Police was wounded. In Kharkiv region at least 1 civilian was injured as a result of a mine explosion in recent days.

On the night of November 18, Russian military committed another crime in Zaporizhzhia region – they shot a family of 4 people (including 2 children).

The Minister of Culture and Information Policy Oleksandr Tkachenko assessed the losses after the Russians stole artifacts from Kherson museums. According to the Minister, about 80% of the collection was stolen from the Art Museum. In the museum of local history, the Russian military also stole the most valuable exhibits.

It is becoming increasingly difficult for Ukrainian citizens to leave the temporarily occupied regions for the government-controlled territory of Ukraine. According to the mayor of Melitopol Ivan Fedorov, only 840 people were released by the Russian military from the four partially occupied regions to Zaporizhzhia through Vasylivka over the past week. Instead, thousands of people are waiting for their turn. Deteriorating weather conditions and “decrees” of the occupation authorities make it more difficult to leave.

International partners keep providing Ukraine with macro-financial support to cover its urgent expenditures. According to Prime Minister Denys Shmyhal, since the beginning of the full-scale war, Ukraine has received $23 billion of financial assistance, and expects to soon receive another tranche from the EU in the amount of €2.5 billion. In addition, on November 18, the Ministry of Finance stated that the Government approved the decision to attract a grant for budget support from the Multi-Donor Trust Fund in the amount of $4.5 billion.

Australian billionaire Andrew Forrest, founder of Fortescue, has pledged to invest 740 million Australian dollars (about $500 million) in a fund for the recovery of Ukraine managed by BlackRock.

Ukraine is considering all possible scenarios of further actions due to Russian missile attacks on the Ukrainian energy system. In particular, the State Energy Trader JSC “Energy Company of Ukraine” carries out imports from the EU to check the possibility of receiving electricity via this route if necessary. In particular, on November 19, the second test import of electricity from Slovakia with a capacity of 1 MW for 2 hours was carried out. In parallel, the Government intensifies the import of energy generating facilities. According to the Prime Minister, about 8.5 thousand generator sets are imported every day.

The Ministry of Economy stated that at least 5 million people in Ukraine had lost their jobs. In addition, it reported that about 7 million people have already left the country because of the fighting, which significantly affected the growth of unemployment.

Ukraine, together with its allies, started drafting a joint declaration on the Ukrainian air shield in response to Russian attacks on critical infrastructure, which was announced on November 19 at the international security forum in Halifax. The purpose of the declaration is to build a comprehensive multi-level air and missile defense system of Ukraine, which will contribute to the overall aviation security of the entire European continent.

On November 19, newly appointed Prime Minister of the United Kingdom Rishi Sunak arrived in Kyiv and met with President of Ukraine Volodymyr Zelenskyi. He, similarly to his predecessors Boris Johnson and Liz Truss, adheres to the policy of supporting Ukraine in resisting a full-scale Russian invasion. During the joint briefing, the President of Ukraine  urged to join the implementation of the 10 steps to peace proposed by the Ukrainian side, in particular regarding security guarantees. At the same time, Sunak noted that the United Kingdom would continue to provide support to Ukraine – it would additionally transfer 125 anti-aircraft guns, radar stations and humanitarian aid worth £16 million.

For the first time in history, Minister of Defence of New Zealand Peeni Henare arrived to Ukraine and met with his Ukrainian counterpart Oleksii Reznikov. During the meeting, the Ministers discussed the development of bilateral cooperation in the defense sector and the implementation of joint projects to strengthen the capabilities of the Armed Forces of Ukraine. In particular, New Zealand continues its mission to support the training of the Ukrainian military in the UK until July 2023. The Ministers also discussed New Zealand’s assistance in demining the territories of Ukraine where hostilities took place.

As part of the military assistance to Ukraine, France recently handed over 2 batteries of French Crotale short-range anti-aircraft missile systems and 2 LRU multiple launch rocket systems, and Germany sent ammunition for Mars II MLRS. In addition, Ukraine received 1 more Zuzana 2 self-propelled howitzer from Slovakia. Meanwhile, Finland has expressed readiness to supply Ukraine with another military aid package worth €55.6 million – the largest since the beginning of Russia’s full-scale invasion. In addition, Israeli media reported that Israel agreed to support Ukraine by purchasing strategic materials for its needs.

On November 17, the District Court of The Hague announced the verdict in the case of the crash of Malaysian flight MH17, which was shot down over Donbas in 2014. The court noted that the passenger plane was shot down with a Buk missile system from the territory occupied by Russia and acknowledged that Russia had been controlling the self-proclaimed “DPR” since at least May 2014. Three of the four defendants (Igor Girkin, Sergey Dubinsky and Leonid Kharchenko) were found guilty of the crime and sentenced in absentia to life imprisonment.

Swedish prosecutor Mats Ljungqvist, who is investigating the damage to the Nord Stream 1 and Nord Stream 2 gas pipelines, stated that traces of explosives were found at the scene of the incident. Thus, the version that the explosions at the facilities occurred as a result of sabotage is confirmed.

On November 17, the IAEA Board of Governors adopted a resolution calling on Russia to cease all activities at Ukrainian nuclear facilities and immediately withdraw its troops from the territory of Zaporizhzhia NPP. This is the third such resolution adopted by the Agency since the beginning of the full-scale Russian invasion of Ukraine.