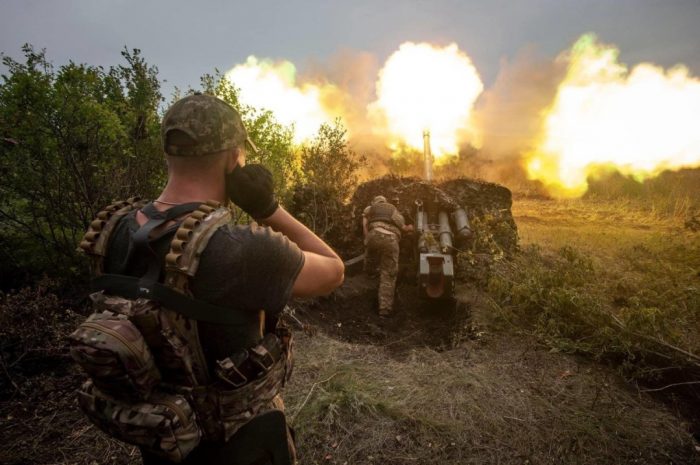 The Armed Forces of Ukraine stepped up their offensive actions in the Kherson direction, while also carrying out intensive strikes on control points and logistic support routes of the Russian grouping located on the right bank of the Dnipro River. Russian troops are defending in the south and continuing attacks in Donbas (in the Avdiivka and Bakhmut areas). They are bringing reserves to the front line and concentrating their efforts on artillery and missile strikes on the forward edge of battle area. The intensity of missile strikes on the AFU’s rear infrastructure decreased slightly compared to previous days amid notifications of the depletion of the Russian Federation’s high-precision weapons stockpile. An IAEA mission arrived in Ukraine to examine the safety situation at the Zaporizhzhia NPP.

Active fighting continues in the Avdiivka and Bakhmut directions. Russian forces try to improve the tactical situation in the Sloviansk direction; they reinforce the grouping in the Kurakhove direction.

The shelling of civilian infrastructure in the Donetsk region is ongoing. Russian troops shelled the base of the Ukrainian Red Cross Society evacuation detachment in Sloviansk. A total of 11 people were killed and 18 civilians were wounded in the region for the period August 29-31.

In the Kharkiv direction, the situation on the front line remains unchanged. The Russian Federation troops are focused on holding their positions, and they also continue constant shelling of Kharkiv and other populated areas in the region. In particular, on August 30, the central districts of Kharkiv were shelled with artillery. Preliminary reports indicate that 4 people were killed and 14 wounded. On the night of August 31, a rocket hit an apartment building in Kharkiv, injuring 2 people. At least 4 civilians have also been wounded in the Kharkiv region in recent days.

The regrouping of the 3rd Army Corps units of the Russian troops in the temporarily occupied territories of Zaporizhzhia region has been recorded. This implies a strengthening of the grouping in this direction or concentration of reserves to support combat operations in the vicinity of Kherson.

Russian troops continue shelling the territory of the region. On the night of August 30, they launched a rocket attack on Zaporizhzhia. As a result of artillery shelling of an agricultural enterprise on the night of 31 August, 2 people were wounded and about 1,000 head of cattle were killed. The shelling of temporarily occupied Enerhodar continues. The Ukrainian side reports that in this case the Russian troops are committing a provocation to discredit the AFU during the visit of the IAEA delegation.

At the same time, the Ukrainian military is carrying out localized strikes on the rear infrastructure of the Russian troops. In recent days, explosions have been recorded in places where Russian troops are deployed in temporarily occupied Melitopol and near the city.

On August 29, the AFU launched an offensive in the Kherson direction. The attacks were preceded by intensive strikes on logistics routes (bridges in Kherson and Nova Kakhovka) and control points of Russian troops. In addition, a crossing that the Russian military was setting up across the Dnipro River and ammunition depots were destroyed. Local residents reported a significant number of explosions in and around temporarily occupied Kherson in recent days.

Nataliia Humeniuk, head of the Joint Press Center of the Defense Forces of the South of Ukraine, confirmed information that Ukrainian troops had broken through the first enemy defense line in Kherson region. She also stated that the Ukrainian Armed Forces launched parallel offensives in other directions.

In response to the Ukrainian attack, Russian forces are intensifying their strikes on civilian infrastructure. They stepped up their shelling of Mykolaiv. An attempt was made to destroy the Inhulskyi bridge located in that city. The head of the Mykolaiv Regional State Administration, Vitalii Kim, reports that on August 29, according to preliminary data, 2 people were killed in the city and 24 people were wounded. The next day the shelling continued, with at least 1 killed and 1 wounded resident of the city known. In addition, there are strikes on other population centers in the region, including Ochakiv. The territory of Dnipropetrovsk region on the Kryvyi Rih direction – near Kryvyi Rih, Nikopol and Marhanets – is also shelled. In Nikopol, as a result of shelling from MLRS on the night of August 31, several multi-story residential buildings were damaged, and 1 person was wounded.

The overall intensity of rocket attacks on Ukraine’s rear regions has decreased to some extent due to the concentration of Russian military assets right on the front line. However, artillery shelling of the border areas of Chernihiv and Sumy regions continues unabated.

Ukrainian Defense Minister Oleksiy Reznikov thanked the NAFO initiative, which is conducting an information confrontation with Russian propaganda and collecting donates for the AFU. NAFO posts humorous memes on social media mocking the military performance of the Russian army, Russian officials and journalists.

The Office of the UN High Commissioner for Human Rights has updated data on civilian casualties resulting from the full-scale Russian invasion of Ukraine. As of August 29, the confirmed casualties are 13,718 (5,663 killed, 8,055 wounded). According to the Office of the Prosecutor General, as of the morning of August 31, as a result of the armed aggression of the Russian Federation in Ukraine, the number of affected children increased to 1,114 (379 children killed, 735 wounded). According to the government platform Children of War, as of August 31, 7,297 children had been deported and 230 were missing.

A  research published by the Institute for the Study of War (ISW) reports that the Russian occupation administration continues attempts to forcibly integrate schools in Ukraine’s temporarily occupied territories into the Russian educational system. The Kharkiv Regional Prosecutor’s Office found that the occupation administration of the temporarily occupied territories of Kharkiv region pressurizes local residents to bring their children to schools for full-time education. If they refuse, parents are threatened with having their children forcibly taken away from their families. In the Kherson region, the occupation administration promises to make lump-sum payments for the education of children in Russian schools. Thus, the Russian side is trying by all means to simulate the beginning of the school year in the temporarily occupied territories to create a propaganda image of the normalization of life in these areas. It also plans to use the educational process to Russify children in the occupied territories of Ukraine. In addition, the Russian authorities create conditions for forced cultural assimilation of Ukrainians displaced to Russia through the creation of so-called “adaptation centers” for “migrants”.

Advisor to the Mayor of Mariupol Petro Andriushchenko stated that there were significant problems with food in the city. This was confirmed by the emergence of mass disorder as a result of the forced cancellation of food distribution by the Red Cross Society due to overwhelming numbers of Mariupol residents in need of humanitarian aid.

On August 30, the first shipment of Ukrainian grain arrived in Africa since Russia began its full-scale invasion. The grain will be distributed to nearly 1.5 million people in Ethiopia and will help the drought-stricken country solve the problem of food supply.

In the temporarily occupied city of Berdiansk (Zaporizhzhia region), there was an explosion next to the building where the headquarters of the organization “We are with Russia” is located.

International partners play a significant role in maintaining macroeconomic stability within Ukraine. According to Finance Minister Serhii Marchenko, during August Ukraine received a record monthly volume of foreign financial aid – $4.6 billion. This became possible, in particular, due to $3 billion in grant funds provided by the U.S. through the World Bank.

President of Ukraine Volodymyr Zelenskyi held a meeting with Rafael Grossi, Director General of the International Atomic Energy Agency (IAEA), who heads the agency’s mission to Zaporizhzhia NPP. The head of the state highly appreciated the visit of the IAEA mission to Ukraine, as the situation around the nuclear power plant was escalating and threatened with a nuclear catastrophe. The visit is supposed not only to examine the situation at Zaporizhzhia NPP, but also to contribute to demilitarization of the area around and inside the plant.

President Volodymyr Zelenskyi met with visiting U.S. Senator and Co-Chairman of the Ukraine Support Group in the Senate Robert Portman and Senator and Support Group member Amy Klobuchar. Volodymyr Zelenskyi briefed the senators in detail about the developments on the front and noted the importance of the security aid coming from the United States.

The adaptation of the Ukrainian legislation to the European one is in active progress as part of the requirements for obtaining Ukraine’s membership in the EU. The head of the state signed two laws about accession to conventions within the framework of the Association Agreement with the EU, which was adopted by the Verkhovna Rada at the session on August 30. The documents of accession to the Convention on the Simplification of Formalities in Trade in Goods and the Convention on the Procedure of Joint Transit, which are the actual implementation of the so called “customs visa-free regime”, have been approved. Moreover, the Verkhovna Rada passed in the first reading the draft law “On the Media” which is one of the main requirements of the European Commission for Ukraine to become a member of the EU.

The EU foreign ministers reached a political agreement to suspend the simplified visa regime with Russia amid the war against Ukraine. The decision on the general ban of tourist visas for Russian citizens could not be reached, given that European politicians were divided on this issue: the Baltic States, Finland, the Czech Republic demanded an agreed EU decision on the non-issuance of visas, while Germany and France were against it. High Representative of the European Union for Foreign Affairs and Security Policy Josep Borrell said that stopping visa facilitation will reduce the number of new visas issued by EU member states, because the process will require more time and effort. He mentioned the decision not to recognize the passports issued by the Russian occupation authorities in the temporarily occupied territories of Ukraine as another conclusion of the meeting. In addition, he noted that Russia’s neighboring countries may take measures at the national level to limit access to the European Union across their borders, in accordance with the EU Schengen Borders Code.

The Swedish government announced the transfer of the seventh military aid package for the Ukrainian Defense Ministry. In this package Sweden provides Ukraine with artillery ammunition worth 500 million Swedish kronor (or $46.8 million). However, this is not the last military aid package: the Swedish Defence Materiel Administration and the Armed Forces will assess the possibility to provide the Archer 155 mm self-propelled artillery system and RBS70 portable anti-aircraft missile system to the Ukrainian Armed Forces.

A White House spokesman confirmed information about Russia receiving a batch of UAVs from Iran. According to the Iranian side, the drones were delivered to Russia in August. It is still unknown whether they were used in operations against Ukraine.