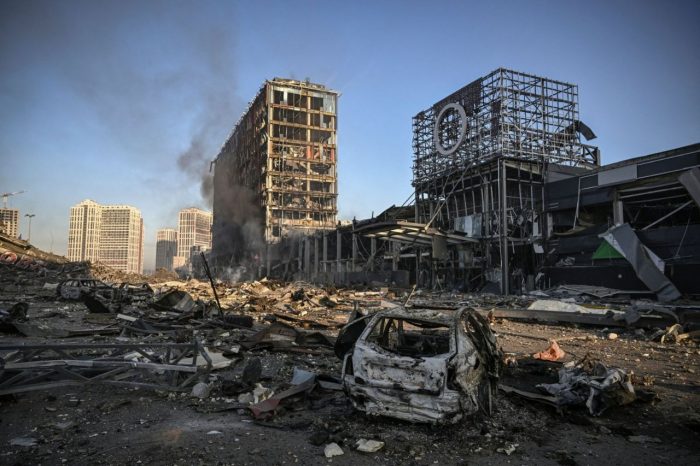 In the evening of March 21, the press service of the Joint Forces reported that during the day, the Ukrainian military repulsed 13 attacks in the area of the Joint Forces Operation. As a result, more than 300 enemy soldiers and equipment (including 14 tanks and 8 infantry fighting vehicles) were destroyed in the Donetsk and Luhansk regions.

The head of the Zhytomyr Regional State Administration Vitaliy Bunechko stated that the Russian military fired on the village of Selets (Zhytomyr region) from Grad multiple rocket launchers. 3 servicemen and 1 civilian were killed.

The head of the Kharkiv Regional State Administration, Oleg Synegubov, stated that mobile units of the Armed Forces of Ukraine had shot down an enemy fighter near Chuhuyiv. He also noted that in the morning, a mobile group of the Special Operations Forces of the Armed Forces of Ukraine shot down two Russian Orlan unmanned aerial vehicles in the territory temporarily occupied by the Russians in Kharkiv region.

According to the head of the Donetsk Regional Military Administration Pavlo Kyrylenko, on March 21, Russian aircraft and artillery fired on Avdiivka. Fires broke out in 15 houses. At least five people were killed and 20 others were injured.

Deputy Chief of the Patrol Police Oleksiy Biloshitsky wrote that during the shelling of Kramatorsk in the Donetsk region, Russian troops once again used phosphate munitions.

On March 21, at 8:55 a.m., in the village of Malynivka in Pologi District (Zaporizhia region), the Russian military fired on civilian vehicles. As a result, 6 people were injured, including children.

In the afternoon of March 21, the Azov Regiment reported that in the last 24 hours of the battle for Mariupol their fighters managed to destroy two Russian tanks, sink an enemy boat, liquidate 17 invaders and seize trophy weapons.

A spokesman for the Odesa Regional State Administration, Serhiy Bratchuk, said that in the morning Russian naval artillery fired on Odesa. As a result, 3 houses were damaged and 1 person was injured.

According to the chairman of the Mykolaiv Regional State Administration Vitaly Kim in the afternoon military of the Russian Federation fired at residential quarters of Mykolaiv. One of the city’s medical facilities was also shelled.

Yevhen Sytchenko, the head of the Kryvyi Rih Regional State Administration, said that there was a shelling in the village of Kryvyi Rih district, no one was killed or injured.

The head of the Rivne Regional State Administration Vitaliy Koval said that 3 missiles had been shot down near the Rivne Armed Forces. Losses from the fourth one, which could not be intercepted, are being clarified.

In Germany, a fake is spread about the fatal beating of a teenager by a group of Ukrainians. It says that a 16-year-old boy was beaten only because he spoke Russian.

The Security Service of Ukraine emphasizes that Russia continues to disseminate its own narratives, fakes, outright provocations and videos from the sites of Russian missile attacks on Ukrainian cities through telegram channels coordinated with Russian intelligence services.

On March 21, 7 out of 8 agreed humanitarian corridors worked. 8057 people were rescued. During the evacuation from Mariupol, vehicles with people came under fire, as a result of which 4 children were injured.

Denys Prokopenko, the commander of the Azov Regiment, said that the number of civilian casualties in Mariupol was growing daily, reaching more than 3,000 as of March 21.

The Office of the United Nations High Commissioner for Human Rights (OHCHR) recorded 2,361 civilian casualties: 902 killed and 1,459 wounded. The actual death toll is much higher, as information from areas of intense fighting comes too late. This applies, in particular, to Mariupol, Volnovakha, Izyum, Severodonetsk, Rubizhne, Trostyanets.

Prosecutor General Iryna Venediktova announced that on March 19, Russian troops removed 2,389 children from the temporarily occupied districts of Donetsk and Luhansk regions. Prosecutors described these actions as the forcible transfer of civilians, including children, to the territory of the aggressor state, in violation of the First Additional Protocol to the Geneva Convention.

According to the Minister of Healthcare Viktor Lyashko, “violation of numerous international conventions, attacks on medical institutions of Ukraine continue. Six medics were killed and 16 others were injured. 135 hospitals were shelled, 9 of which were destroyed. Also 43 ambulances came under fire. “

According to updated information from the place where the shell hit one of the shopping centers in the Podilskyi district of Kyiv, which took place on the evening of March 20, the number of victims of the incident increased to 8 people.

Roman Prymush, deputy head of the State Emergency Service, said 21 Ukrainian rescuers had been killed and 47 injured in the shelling, which is a war crime and will be considered in international courts.

Iryna Vereshchuk, Minister of Reintegration of Temporarily Occupied Territories, said that three Israeli citizens had been abducted in Melitopol. Beryslav Mayor Oleksandr Shapovalov and a local activist have been abducted in the Kherson region and have been in captivity for three days. Drivers and an ambulance crew who were trying to deliver humanitarian aid to Vovchansk in the Kharkiv region on March 20 were released.

Mykhailo Podoliak, an adviser to the head of the President’s Office, said that more than 3 million Ukrainians had left for European countries. Only 11-12 million people became internally displaced persons.

Mykhailo Pinchuk, director of the XII Months Zoo in the village of Demydiv in the Kyiv region, reports a difficult situation at an institution under his control, which is in the occupied territories. 300 animals are doomed because there are no supplies of food and heat.

Residents of Kherson continue to protest against the temporary occupation by Russian troops. According to eyewitnesses and Telegram channels of regional media in Freedom Square, Russian security forces hurled grenades at pro-Ukrainian protesters and opened fire on them. Injured citizens are reported in advance.

Energoatom reports that after pro-Ukrainian rallies in Energodar on March 20, Russia sent more than 500 security forces to the city to quell any protests.

The press service of the Verkhovna Rada reported that the President signed a law on the settlement and simplification of reconstruction work to eliminate the consequences of hostilities.

The Ministry of Economy told about the relocation of 40 companies from the zone of active hostilities, of which 18 have already resumed work at the new location. Another 299 companies will move their facilities in the near future.

President Volodymyr Zelensky had a telephone conversation with the Prime Minister of the Netherlands Mark Rüyut and informed him about the war crimes of the Russian Federation in Ukraine.

On March 21, online talks between the official delegations of Ukraine and Russia took place. According to Mykhailo Podoliak, an adviser to the head of the President’s Office and a member of the Ukrainian delegation, Ukraine is not making any concessions in negotiations with the Russian Federation, as it is defending its freedom and territorial integrity.

Representatives of the Lithuanian Seimas arrived in Kyiv to demonstrate their support for Ukraine during the Russian military aggression. “This is the first parliamentary delegation from European partner countries to arrive in Ukraine since the beginning of the large-scale Russian invasion of Ukraine,” said Kyiv Mayor Vitaliy Klitschko, who met with Lithuanian lawmakers.

The Prime Minister of Ukraine Denys Shmyhal said that 13 countries had joined the signing of a joint statement “On the urgent need to modernize Ukraine’s air defense.” The parliamentarians of the Czech Republic, Estonia, France, Georgia, Germany, Ireland, Latvia, Lithuania, Poland, the Netherlands, Sweden, the United States and the United Kingdom signed a joint statement calling for support for Ukraine’s military and civil defense, humanitarian aid and nuclear protection.  projects.

According to Hungarian media reports, Hungarian Foreign Minister Peter Szijjártó said that Budapest would not support sanctions against Russia, which could pose a threat to Hungary’s energy resources. This threatens EU sanctions on Russian gas imports.