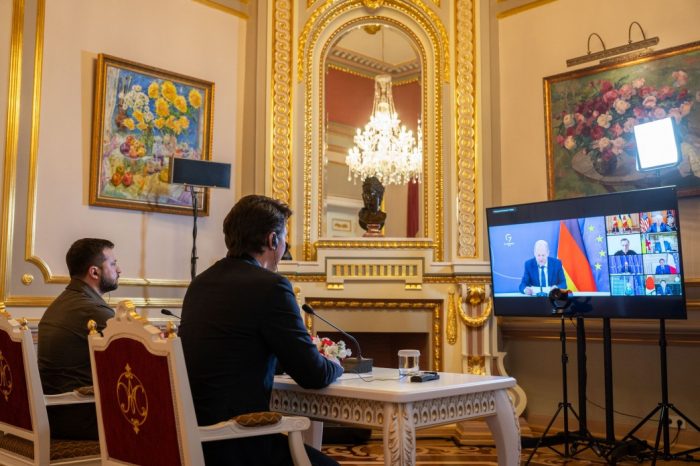 Russian Federation troops continue their offensive to establish control over the territories of Donetsk and Luhansk regions of Ukraine, as well as to provide a land corridor to the temporarily occupied Crimea. The Russian Federation’s efforts are aimed at destroying airfield infrastructure in order to prevent Ukrainian aviation operations in eastern Ukraine and the Black Sea operating zone.

Instead, the Ukrainian Armed Forces launched a counteroffensive in the Kharkiv direction and carried out intensive strikes against Russian positions on Zmiinyi Island in the Black Sea, using UAVs and aircraft.

Despite the withdrawal of Russian troops from Chernihiv and Sumy territories, rocket attacks on these regions remain ongoing. In particular, the State Border Guard Service of Ukraine reported that Russian troops attacked border villages from Russian territory on May 8. Also, the Jewish cemetery in the town of Hlukhiv was damaged as a result of the shelling.

The counteroffensive by the Armed Forces of Ukraine continues in the Kharkiv region, pushing Russian troops away from the regional center. The UAF have resumed control of several population centers to the east and north of Kharkiv. Russian troops are trying to stop the Ukrainian advance. In particular, on May 5, they tried to regain lost positions near the settlement of Staryi Saltiv. Additionally, Russian troops blew up three road bridges in Kharkiv region in order to halt the advance of the Ukrainian Armed Forces.

In the Izium direction, Russian troops are preparing to continue their offensive in order to get into the rear of the Ukrainian units in the area of the Joint Forces Operation.

Shelling of Kharkiv region continues, but with less intensity. Between May 5 and 8, at least 7 people were killed and 13 injured in the region. Cultural heritage sites are being destroyed — a missile strike destroyed the museum of eighteenth-century Ukrainian philosopher Hryhorii Skovoroda.

Fighting continues in the Luhansk region. The fiercest clashes are taking place near the towns of Rubizhne and Popasna, which the Russian military is seeking to occupy for a further offensive on Sievierodonetsk. In the area of Popasna, the Ukrainian military withdrew to new positions better prepared for defense. Also on May 6, the Luhansk Regional Military Administration reported that Russian troops attempted to force the Siverskyi Donets River near the locality of Kreminna.

In addition, massive missile and air strikes continue along the entire front line. Thus, in the evening of May 7, there was an air strike on a school in Bilohorivka. According to preliminary information, this resulted in the death of more than 60 people who had been hiding in the school premises.

According to the Zaporizhzhia Regional Military Administration, Russian military has intensified artillery and air strikes in the region. The situation is most acute in the eastern part of the region, near Huliaipole, which is close to the administrative boundaries of the Donetsk region. Ivan Arefiev, spokesman of the Regional Military Administration, informed that Russian troops are trying to restrain the AFU and destroy Ukrainian artillery units.

Russian forces continue strikes in central Ukraine to destroy critical infrastructure. For example, on May 7, they launched a missile strike on an infrastructure facility in Poltava region.

Shelling continues in the Mykolaiv and Kryvyi Rih directions. The Ukrainian military responds to Russian actions by using artillery and UAVs in the southern direction. In the Mykolaiv region, the Ukrainian Armed Forces destroyed an enemy ammunition depot and about 20 pieces of military equipment.

The Ukrainian military carried out several strikes against Russian positions on the territory of Zmiinyi Island. A Russian landing boat and two Tor surface-to-air missile systems were hit by UAVs. Ukrainian aviation also carried out a raid on Zmiinyi Island. Russian troops without adequate air defense support are unable to exploit the potential of the island, located in a strategically important location near the mouth of the Danube River. However, the Armed Forces of Ukraine are also unable to control the island, as they would then become an easy target for Russian strikes.

Russian troops continue their shelling of the Odesa region. On May 6, 7 and 8 they launched missile strikes on the territory of the region, damaging civilian infrastructure and residential buildings.

According to the Office of the UN High Commissioner for Human Rights, as of May 6, the number of civilian casualties in Ukraine as a result of the large-scale Russian invasion is 6,802 (3,309 killed and 3,493 wounded). As of May 8, more than 638 children were affected in Ukraine. According to official figures, 225 children were killed and more than 413 were injured.

In spite of enormous difficulties, the evacuation of civilians located at the Azovstal metallurgical plant and nearby areas of Mariupol was carried out. The operation, which was conducted in coordination with the United Nations and the ICRC, began on April 29. As of May 6, about 500 people had been rescued from the combat zone as part of the operation. The Russian military did not observe the ceasefire during the operation, and as a result, three soldiers of the Azov Regiment, who were assisting civilians, were killed during the evacuation operations. The Ministry for Reintegration of the Temporarily Occupied Territories calls on the international medical organization Doctors Without Borders to form an evacuation mission to rescue Azovstal defenders. The conditions in which the military are being held, the lack of access to medical care, and the deterioration of their physical and psychological condition are in violation of Section IX of Article 55 of the Charter of the United Nations.

On May 6, as a result of another prisoner exchange, 28 Ukrainian military personnel and 13 civilians were released from Russian captivity. In total, more than 360 Ukrainians have already been released, 72 of whom are civilians.

Ukrainian President Volodymyr Zelenskyi announced the forced deportation of about 500,000 Ukrainians to remote regions of Russia. Ombudsman Liudmyla Denisova reported on the forced registration of citizenship of the so-called Luhansk and Donetsk People’s Republics for Ukrainians in the occupied territories. People are threatened that if they refuse it, they will lose any means of subsistence and will be repressed. Also in the Kherson region, the occupation administration is trying to put Russian passports into circulation and replace the Ukrainian state symbols with its own.

Ukrainian President Volodymyr Zelenskyi indicated that the number of civilian victims of the fighting in Mariupol could be as high as 20,000. According to the Azov Regiment, there may be more than 10,000 dead in mass graves around the city alone. According to Prime Minister Denys Shmyhal, more than 95 percent of the structures in Mariupol were destroyed as a result of Russian aggression.

The Ukrainian Institute of Mass Information recorded 85 crimes committed by the Russian military against media and journalists in Ukraine. Among them are murders, shelling of journalists and media offices, threats, persecution, kidnappings of journalists, cyber attacks on Ukrainian media websites, inability to work and print newspapers due to the destruction of infrastructure, etc.

At the International Donors’ Conference in Warsaw, Prime Minister Denys Shmyhal announced that Ukraine has received more than $12 billion in military and financial aid since the start of the full-scale invasion by the Russian Federation. In addition, he reported that there is an active discussion in the EU about the transfer of seized Russian assets in favor of Ukraine.

The National Bank of Ukraine informed that Ukraine’s international reserves decreased by 4 percent in April.

The international community continues to support Ukraine in its fight against Russian aggression. The newest formats of monetary aid and tougher sanctions against Russia are being arranged.

Ukrainian President Volodymyr Zelenskyi took part in the meeting of the heads of states of the Group of Seven (G7), which was held in the format of a video conference. He went online from Kyiv together with Canadian Prime Minister Justin Trudeau, who was on an official visit to Ukraine. As a result of the meeting, the G7 heads of state agreed on a special declaration in which they pledged to continue defense, economic and humanitarian support for Ukraine, to increase sanctions pressure on Russia, including gradually getting rid of dependence on Russian energy resources with the introduction of a ban on oil imports from Russia.

Restrictions imposed on Russia and the Republic of Belarus in response to the aggression against Ukraine are tightening. Thus, the UK government announced an increase in import duties on goods totaling 1.4 billion pounds sterling, and a ban on the export of goods worth 250 million pounds sterling.

Demonstrating international support and solidarity with the Ukrainian people, European government members and politicians are actively visiting Kyiv as part of official visits. In particular, the foreign ministers of Estonia, Lithuania and Latvia, the prime ministers of Croatia and Canada, the head of the Norwegian parliament had meetings with representatives of the Ukrainian authorities, during which they discussed defense assistance, reconstruction of infrastructure and enhancing security support for Ukraine. Zelenskyi also held remote talks with Israeli Prime Minister Naftali Bennett, German President Frank-Walter Steinmeier, the 43rd President of the United States George W. Bush and addressed the Parliament of Iceland. U.S. First Lady Jill Biden visited Ukraine and met with Olena Zelenska in Uzhhorod. On the Day of Remembrance and Reconciliation, President of the German Bundestag Bärbel Bas visited Kyiv.

Ukraine continues to receive financial and military aid from the international community. Polish Prime Minister Mateusz Morawiecki reported that the International Donors’ Conference on fundraising for Ukraine raised $6.5 billion. On May 7, it was announced that Ukraine will receive $1.5 billion from the World Bank, which will be used to reimburse state budget expenditures to pay employees of state bodies and budget-funded educational institutions.

The UK announced a new package of military aid to Ukraine worth about 1.6 billion dollars.

In addition, Ukrainian President Volodymyr Zelenskyi announced the creation of a new platform to support Ukraine — United24. This initiative allows people from all over the world to transfer funds to support Ukraine (defense expenditures and ensuring de-mining of territories, humanitarian and medical aid, and state reconstruction).

Spanish law enforcers detained blogger Anatolii Sharii, a well-known pro-Russian activist and provocateur, at the request of his Ukrainian colleagues. The Security Service of Ukraine suggests that he carried out illegal activities to the detriment of Ukraine’s national security in the information sphere.