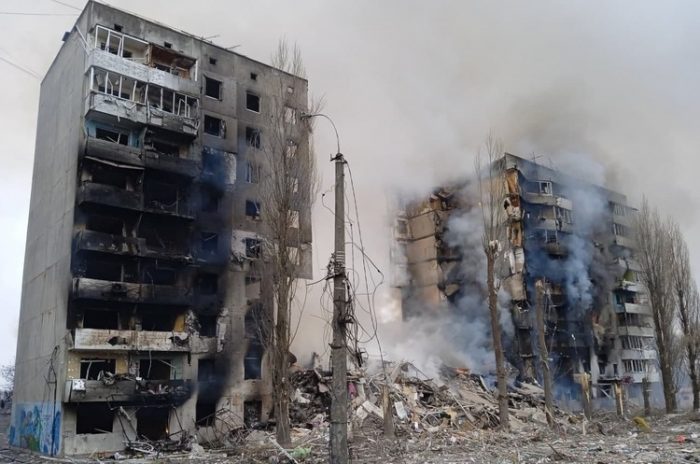 Russian troops are getting ready for active offensive operations in eastern Ukraine. Efforts to establish full control of the city of Mariupol continue.

Oleh Syniehubov, head of the Kharkiv Regional Military Administration, reports that the Russian military launched about 27 strikes with various types of weapons against residential areas of Kharkiv on the night of April 5-6. According to the Kharkiv regional prosecutor’s office, 3 people were killed on April 6 as a result of artillery shelling of the town of Balakliia. Also, Russian troops launched a missile strike on Lozova, which is an important railway hub.

Anticipating an attack by Russian troops from the Izium area, Kharkiv regional authorities recommend that the residents of Lozova and Barvinkove evacuate.

Serhii Haidai, head of the Luhansk Regional Military Administration, says that the Russian Federation keeps pulling equipment and troops into the region. Their offensive should be expected in a few days. The preparations for it are accompanied by battles for Rubizhne and Popasna, an attempt to break through the Ukrainian Armed Forces’ defenses near Novotoshkivske, and mass shelling of population centers in the Luhansk region. On 6 April, Sievierodonetsk was shelled. As a result of the shelling, 10 multi-story buildings, a shopping center and garages caught fire. In the city, 5 people were injured as a result of the shelling of the humanitarian aid center.

In Rubizhne, 1 person was killed and 1 more wounded in the shelling.

Given the intensity of the fighting, Serhii Haidai calls on civilians to evacuate from the territory of the region.

According to the General Staff of the Armed Forces of Ukraine, Russian forces shelled population centers near Donetsk (including Pisky, Ocheretyne, Marinka and Krasnohorivka). A humanitarian aid distribution site was shelled in Vuhledar (Donetsk region). According to the Donetsk Regional Military Administration, 4 people were killed and 4 were wounded as a result of the shelling. Also 1 person was killed on the territory of the Ocheretyne community. 4 people were injured as a result of shelling on the territory of Marinka community. Under such conditions, the authorities urge the population of Donetsk region to evacuate.

The General Staff of the Armed Forces of Ukraine reports that Russian troops continue shelling populated areas near the front line in the Zaporizhzhia region.

In the Kherson region, an offensive by the Armed Forces of Ukraine liberated the village of Osokorivka, located near the border with the Dnipropetrovsk region.

At least 1 person was killed as a result of Russian shelling of Novooleksiivka urban-type settlement (Kherson region).

On the night of April 5-6, a rocket hit an infrastructure facility in Koziatyn in Vinnytsia region.

According to Enerhoatom, Russian troops together with collaborators are trying to create fake authorities (city administration) in Enerhodar.

Minister for the Reintegration of the Temporarily Occupied Territories Iryna Vereshchuk reported that 4,892 people were evacuated by humanitarian corridors on April 6.

The Office of the UN High Commissioner for Human Rights recorded 3,776 civilian casualties in Ukraine as of April 6. 1,563 people were killed and 2,213 injured as a result of the Russian Federation attack. According to juvenile prosecutors, more than 446 children were injured in Ukraine (167 were killed; 279 were wounded to varying degrees of severity).

Volodymyr Zelenskyi stated that Russian troops are blocking the delivery of humanitarian supplies to Mariupol because they fear the world will see the devastating consequences of their activities in the city. They are now trying to hide evidence of their crimes. The Mariupol City Council reported that Russian mobile crematoriums operate in the city, where they burn the bodies of murdered civilians.

The All-Ukrainian Council of Churches called on every state in the world to recognize the genocide of the Ukrainian people during the Russian invasion in 2022 and to condemn the ideology of the “Russian world” as justifying the genocide of peoples and the destruction of entire states.

Minister of Internal Affairs Denys Monastyrskyi stated that every population center temporarily seized by the Russian military records destruction and casualties among the population. The number of missing persons is measured in hundreds. For example, Taras Dumenko, head of the Hostomel Village Military Administration, reported that more than 400 people were missing in Hostomel during the 35 days of the occupation.

The Minister for Reintegration of the Temporarily Occupied Territories, Iryna Vereshchuk, reported that Russian troops have taken many civilians hostage – mayors, journalists, volunteers, priests, and women. Among the latest news is the kidnapping of the wife of a Ukrainian serviceman in Zaporizhzhia region in order to put psychological pressure on her husband. The Verkhovna Rada Commissioner for Human Rights Liudmyla Denisova stated that she has evidence of the abduction of Ukrainian civilian men by the Russian military, whom they then plan to pass off as “prisoners of war.”

According to the State Emergency Service, 27 Ukrainian rescuers were killed during the active phase of the conflict; another 72 emergency workers were injured.

Minister of Infrastructure  Oleksandr Kubrakov said that most of the large state and private industrial enterprises that provide the economy of the Zaporizhzhia region have already resumed work.

Minister of Economy Yuliia Svyrydenko informed that 826 companies have received loans from state banks totaling 1.1 billion UAH since the beginning of the war. The Ministry of Economy urged commercial and state banks to intensify their lending activities, as thousands of entrepreneurs need these funds in order to set up production.

The press service of the National Bank of Ukraine indicated that Ukraine’s foreign exchange reserves increased by 2 percent in March. It is noted that the reserves grew primarily due to the receipt of funding from international partners, which compensated for the sale of currency by the National Bank and payments for servicing the national debt.

Ukrainian President Volodymyr Zelenskyi made a video address to the Irish Parliament. He informed MPs about a possible global food crisis due to the Russian invasion of Ukraine and spoke about the Russian army’s war crimes on Ukrainian territory. Zelensky called on Ireland to halt trade ties with Russia, impose an energy embargo and tougher sanctions.

President of the Parliamentary Assembly of the Council of Europe (PACE) Tiny Kox arrived in Ukraine. During the meeting with the Chairman of the Verkhovna Rada of Ukraine Ruslan Stefanchuk, they discussed the consequences of the Russian aggression and the best ways for the Council of Europe to support Ukraine.

On April 6, a number of countries imposed new restrictive measures against the Russian Federation because of its aggression against Ukraine. The United Kingdom’s new sanctions include freezing the assets of Sberbank and Moscow Credit Bank, as well as imposing a complete ban on new foreign investments in Russia. There is also a ban on exports of key oil refining equipment; a ban on imports of iron and steel products; and personal sanctions against eight Russian oligarchs

NATO Secretary General Jens Stoltenberg said before a meeting of the North Atlantic Council at the level of foreign ministers that the war unleashed by Russia against Ukraine is entering a critical stage, and NATO allies are ready to provide Kyiv with all necessary assistance to counter the expected next offensive of Russian troops.

The Council of Permanent Representatives of the EU at ambassadorial level has supported a decision to grant immediate access to the EU’s REACT-EU emergency relief fund for refugees from Ukraine, totaling 3.5 billion euros.

The Turkish embassy has returned to Kyiv. As of April 6, it resumes work at its permanent location in the Ukrainian capital.