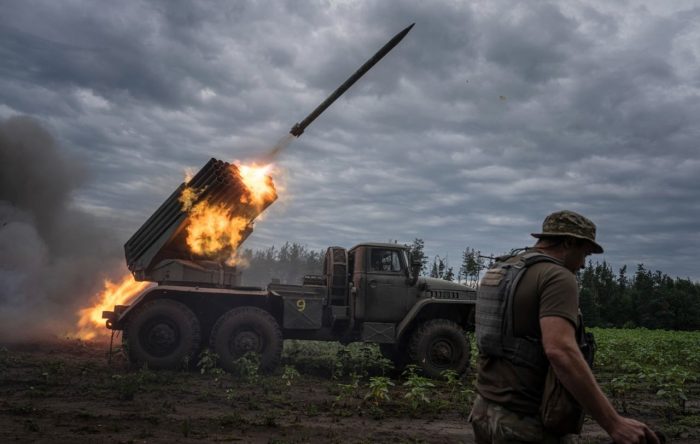 There is a redeployment of Russian troops to the southern direction, where the Ukrainian Armed Forces continue their attacks. The Russian command strengthens its defenses and concentrates forces for a new offensive to reach the administrative borders of the Kherson region. In Donbas, Russian forces are concentrating their activity in the Avdiivka and Bakhmut directions. Intense shelling along the entire front line is ongoing.

The main attention of Russian troops is now concentrated on the storming of Pisky near Donetsk. Thus, they are trying to create prerequisites for encircling Avdiivka. Fighting also continues in the Bakhmut area. Russian Federation troops are advancing from the Vuhlehirsk TPP and attempting to reach the southern outskirts of Bakhmut, creating a threat to the flank of the Ukrainian Armed Forces’ grouping.

In other parts of the front, the attacks are local in nature. Intense shelling continues, as a result of which 10 people were killed and 15 civilians were wounded in the territory of the Donetsk region during the period August 1-3.

In Kharkiv region, Russian troops are trying to hold their positions and prevent a counterattack by the Armed Forces of Ukraine. The former launched attacks near the town of Balakliia. The shelling of Kharkiv, Chuhuiv and other settlements in the region continues unabated.

In Zaporizhzhia region, shelling continues along the front line, which remains stable.

The Armed Forces of Ukraine carry on a counteroffensive in the Kherson direction, gradually liberating more settlements. Russian forces are trying to prevent this, regain lost positions, and reach the administrative borders of Kherson region.

Both sides are concentrating military contingents and shelling in this direction. The AFU attacked the infrastructure of Russian forces, striking their base in Chornobaivka, near Kherson. On the Russian side, constant shelling of Mykolaiv and neighboring communities is ongoing. The city’s civilian infrastructure — a hospital building, a supermarket, and an equestrian sports school — is suffering damage.

The shelling by Russian troops of the Kryvyi Rih district of the Dnipropetrovsk region continues. As a result, railway infrastructure was destroyed and train traffic was suspended.

The Russian military is shelling the territory of Synelnykivskyi district and the area of the town of Nikopol in Dnipropetrovsk region with MLRS. The shelling of Nikopol was particularly intense on the night of August 4, which resulted in damage to dozens of homes.

On August 2, Russian forces launched a missile strike on Ukrainian territory from the Caspian Sea. Most of the missiles were intercepted by air defense. Others, however, struck military facilities in the Lviv region.

There was shelling of the border areas of Chernihiv and Sumy regions.

The Pentagon denies Russian Defense Minister Sergei Shoigu’s statements about the destruction of several HIMARS in Ukraine. According to U.S. data, none of the systems of this model supplied to the AFU were lost. The Russian command continues to spread disinformation to undermine the morale of Ukrainians and discredit the idea of military assistance from partners.

The Russian special services have developed dangerous game-like mobile applications that enable them to obtain information from users about the location of military facilities and critical infrastructure on Ukrainian territory.

The Security Service of Ukraine liquidated a bot farm that was spreading fake news about situations from the front and conducting other information sabotage aimed at undermining morale and destabilizing the internal situation in Ukraine.

According to the Office of the UN High Commissioner for Human Rights, as of August 1, the number of civilian casualties in Ukraine since the beginning of the large-scale Russian invasion is 12,584 (5,327 killed and 7,257 wounded). According to the Office of the Prosecutor General, as of the morning of August 3, more than 1,051 children (358 dead, 693 wounded) were affected by the armed aggression of the Russian Federation in Ukraine.

The Russian military, through its actions in the temporarily occupied territories, poses threats of a global nature. The seizure of the Zaporizhzhia NPP and the use of its territory for military purposes could lead to such consequences. The IAEA is not yet able to monitor the situation there — its contacts with ZNPP personnel remain inconsistent. Rafael Grossi, head of the Agency, stated that all principles of nuclear safety have been violated at the plant, which is located in the place of active hostilities and has come under fire. He questioned whether the plant was receiving everything it needed to function properly, because the supply chain of equipment and spare parts to the site had been interrupted.

The Supreme Court of the Russian Federation recognized the Azov Regiment as a terrorist organization and banned it on Russian territory. This can be used by the Russian side to further violate prisoners’ rights and deprive them of the immunities guaranteed by international law.

Russia does not allow representatives of the Red Cross to the site of the explosion at the Olenivka penal colony, where Ukrainian military prisoners, including Azov fighters, were killed. This is a direct violation of the Geneva Convention. Russia thus prevents international observers from getting to the site of the explosion and makes it impossible to collect evidence about the incident. Thus, the Russian military seeks to hide the evidence of its guilt for the destruction of the building with prisoners, carried out to conceal the improper conditions of detention and forms of interrogation of Ukrainian servicemen. The Main Directorate of Intelligence of the Ministry of Defense of Ukraine found that Azov prisoners were tortured and subjected to psychological pressure.

The Russian military also continues to commit crimes against civilians in the temporarily occupied territories of Ukraine. Since the start of the full-scale war, they have established 20 filtration camps. Within these facilities, the Russian military has resorted to torture, interrogation, beating, and shooting of detained Ukrainians. Such actions violate the Convention for the Protection of Civilian Persons in Time of War.

On August 2, the mandatory evacuation of civilians from Ukrainian-controlled territory in the Donetsk region began. The reason for its start is the inability to provide people with proper living conditions during the winter period, in particular due to the lack of gas supply. According to the Donetsk Regional Military Administration, approximately 250,000 civilians remain in these territories as of today.

There are ongoing attempts by Ukrainians to leave the temporarily occupied territories of Kherson. However, the Russian military is endangering people’s safety with their actions. An evacuation bus was shot, as a result of which 3 people were killed and 5 were wounded.

The European Union has transferred to Ukraine €1 billion of exclusive macrofinancial assistance. The first tranche of €500 million has already been received by the National Bank. €1 billion is part of a large package of support for Ukraine to overcome the financial consequences of the war totaling €9 billion. The funds will help to finance the priority budgetary needs of the state.

The Ministry of Finance reported that in July the state budget deficit was UAH 3.7 billion, or $100 million. By comparison, in June the deficit was UAH 141.2 billion. First of all, it is connected with international financial aid coming to Ukraine — in July the general fund of the budget received UAH 80.4 billion of grants.

At the end of July 2022, Ukraine doubled the amount of electricity that it can export to EU markets. This will help Ukrainian producers profit due to the fact that electricity prices in Ukraine are several times lower than in neighboring countries.

According to the information of the Minister of Agrarian Policy and Food, harvest forecasts have improved this year — their index rose from 60 to 65-67 million tons of grains and oilseeds. During the harvesting period there has already been harvested 12 million tons of grain on an area of 3.5 million hectares.

For the first time since the beginning of the full-scale Russian invasion, a ship carrying Ukrainian food has left the port of Odesa. The Sierra Leone-flagged ship Razoni has already passed the Bosporus and is on its way to a port in Lebanon, having traversed a special corridor in the Black Sea that was arranged to unblock Ukrainian ports. The recovery of agricultural exports is important from the perspective of both global food security and that of Ukraine.

Ukrainian President Volodymyr Zelenskyi continues to communicate with European partners. He had a telephone conversation with French President Emmanuel Macron about defense assistance and post-war reconstruction of Ukraine (in particular, France’s joining the Fast Recovery Plan), as well as documentation of Russian war crimes on Ukrainian territory. The main message of the Ukrainian president was a request to unblock the €8 billion of macrofinancial aid to be provided by the EU. Zelenskyi also had a telephone conversation with NATO Secretary General Jens Stoltenberg to determine priorities for providing military assistance to Ukraine. Zelenskyi stressed the need to speed up the process of providing Ukraine with heavy weapons. Additionally, the Ukrainian president met with the acting head of the OSCE, Polish Foreign Minister Zbigniew Rau. Zelenskyi thanked him for his support and for his defence assistance to Ukraine, in particular for the supply of Krab self-propelled artillery units. Zelenskyi also met with Estonian Foreign Minister Urmas Reinsalu. During the meeting, the sides discussed the start of reconstruction of the infrastructure destroyed by the Russian army.

An active Ukrainian-American dialogue is ongoing. In particular, on August 1, Head of the Office of the President of Ukraine Andrii Yermak, Foreign Minister Dmytro Kuleba and AFU Commander-in-Chief Valerii Zaluzhnyi had a telephone conversation with U.S. Secretary of State Anthony Blinken, National Security Advisor to the President of the United States Jacob Sullivan and Chairman of the Joint Chiefs of Staff General Mark Milley. The parties discussed the operational situation on the frontline, Ukraine’s defense needs, and the organization of the upcoming conversation between Presidents Volodymyr Zelenskyi and Joseph Biden.

Ukraine continues to receive logistical assistance from Western partners. On August 1, the third MARS II multiple rocket launcher system, provided by the German Ministry of Defense, arrived in Ukraine, as well as four additional HIMARS multiple rocket launchers, provided by the United States. In addition, the United States announced a new $550 million military aid package for Ukraine, including ammunition for HIMARS and 155mm artillery. U.S. President Joseph Biden signed the relevant memorandum. At the same time, Spain reported that it would not be able to transfer Leopard 2 tanks to Ukraine due to their unsatisfactory technical condition.

Canada extended sanctions against Russia, including sanctions against 43 Russian military officials and 17 defense companies directly or indirectly supporting the Russian army. On August 3, the Federal Council of Switzerland announced that it had joined the seventh package of EU sanctions imposed in connection with Russia’s full-scale invasion of Ukraine. Under the new sanctions, the assets of Russia’s largest bank, Sberbank, are frozen and it is prohibited from providing funds, economic resources or technical services. Another 54 individuals and 9 legal entities were also added to the Swiss sanctions list.