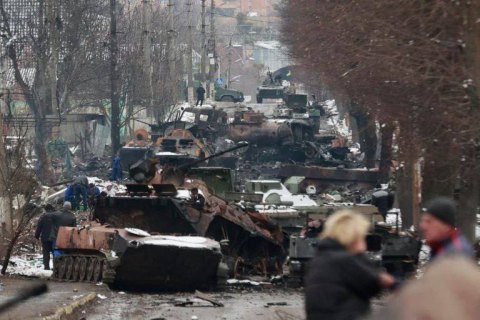 On 02.03.2022 the Vostok task force reported that according to the information it had received, the planning documents for the war with Ukraine had been approved back on 18.01.22 and the operation itself was to take place within 15 days, that is from 20.02 to 06.03.

During the current day, up to thirty combat aircraft have violated Ukrainian airspace, mostly from the Republic of Belarus, and bombed the civilian population. The main strategic targets of the Russian occupiers remain Kyiv, Kharkiv, and Mariupol, fierce fighting is also going on near Kherson, and Voznesensk is preparing for street battles.

On the morning of March 2, the occupiers launched two air strikes on the city of Irpin. The missiles hit residential buildings. The gas pipeline is damaged, and information about civilian casualties is being verified.

Around 17:50 the 14th Separate Mechanized Brigade named after Prince Roman the Great and the 95th Separate Airborne Assault Brigade liberated Makariv in the Kyiv region and gained a foothold there.

Shelling continues in Bucha. The population is in shelters. In Boryspil district, law enforcers are gathering information about individuals who are moving in the direction of Brovary or Boryspil.

Around 21:30, the Russian occupiers launched a missile strike near the South Station. The air defense worked perfectly and neutralized the Russian cruise missile, but, unfortunately, the wreckage damaged a large heating main. Also, according to Ukrzaliznytsia, Russian terrorists carried out an air strike on the Southern Railway Station in Kyiv, where thousands of Ukrainian women and children were being evacuated. The station building remained standing and sustained minor damage. Information on casualties is being clarified.

The Armed Forces of Ukraine destroyed a Russian command post in the village of Dytyatky near Chornobyl. The Chief of Staff of the 36th Army of the Eastern Military District, Major General Sergei Nirkov, fled to the city of Mozyr in Belarus, leaving the personnel destroyed by our army.

In Korosten, at about three o’clock, one of the checkpoints was hit from the air, and the Korosten Media TV tower was destroyed. TV broadcast in the city has stopped.

At about 11:30, Konotop Mayor Artem Semenikhin said that Russian troops entering the city had issued an ultimatum to local authorities. According to him, if the residents resisted, the city would be covered with artillery. He asked the residents present if they would fight for Konotop, and they agreed.

At about 11:00, the Russian armed forces approached the outskirts of Energodar, where the Zaporizhzhya NPP, the largest nuclear power plant in Europe, is located. Residents of the city are gathering together, blocking the entrances to the city with checkpoints and preparing to meet the armed occupier. The loss of ZNPP could threaten a man-made catastrophe for the whole of Europe.

However, fighting continues in the Voznesensk area, not far from the South-Ukraine Nuclear Power Plant. The Bulgarian bridge over the river Mertvovod was blown up. The city holds the defense.

A Russian missile hit a foreign ship. The administration of seaports of Ukraine reported that the ship “Banglar Samriddhi” (under the flag of Bangladesh), which is standing on the raid of the port of “Olbia”, was damaged. The rocket hit the topside. There is a fire on the ship.

At 13:30, the Russian occupiers struck another cruise missile near the Kharkiv Regional State Administration. The rockets hit the central part of the city: the City Council building, the Palace of Labor building and high-rise buildings.

The shell of the occupiers hit the Assumption Cathedral of Kharkiv. People took refuge in the cathedral. Fortunately, no one was injured.

The Russians have lost their humanity. The shelling of areas around Severodonetsk and Lysychansk is currently underway. During the shelling, the TV tower in Lysychansk was damaged, and direct hits to residential buildings and playgrounds were recorded. In Severodonetsk, the occupiers fired on a kindergarten. The roof of the kindergarten was damaged and the heating network was broken. There are about 10 people (8 children) in the basement. Measures are being taken to evacuate them. Russian troops fired on Avdiivka from the Tornado multiple rocket launcher. Toretsk is also under fire.

Today, Ukrainian troops advanced in the direction of Horlivka, liberated the city from the occupiers and successfully got a foothold there.

Meanwhile, an information war is being waged on the Internet. A targeted advertisement was launched about the alleged “capitulation of Kyiv”, dissemination of misinformation on Twitter, Facebook, Instagram and other social networks.

The “NachShtabu” channel has existed for about four years and has positioned itself as a Telegram channel that publishes news of the security forces and the problems of the Ukrainian army. On March 2 it was revealed that this resource is moderated by the Russian information and psychological operations specialists, and the military was urged not to adjust the enemy’s fire.

The enemy created a telegram channel “Verkhovna Rada”, which misleads the citizens of Ukraine and publishes false information. Authorities promptly responded to the provocation and urged citizens to check  information only on official and verified sources.

The Russian occupiers began mass creation of fake pages of Ukrainian military units. For example,  the 93rd Brigade, 81st Brigade, etc. The pages are maintained by the enemy in the Ukrainian language.The published content (losses of our units, civilian casualties, negatives about the Ukrainian army, etc.) is intended to cause panic and dissatisfaction with the command.

March 2 is the seventh day of the Russian invasion in different parts of Ukraine, with civilians, ambulances, orphanages, hospitals and residential areas being hit by shelling and airstrikes.

The Russian occupiers continue to accumulate a large number of troops and equipment in the Kyiv region. The critical situation is in the city of Bucha (Kyiv region). With the help of the Red Cross, it was possible to transfer medicines, bandages, hygiene products, and baby food. The occupiers also launched an air strike on the Southern Railway Station in Kyiv, where thousands of Ukrainian women and children are being evacuated. There was shelling and bombing in the city of Irpin in the morning, resulting in damage to residential buildings.

There were shellings in the north. An air strike on an artillery school was carried out in Sumy. There was a fire all night. The Russian occupiers fired on the Chernihiv district hospital. A cruise missile hit the building, killing one person and injuring five others. In addition, cold water supplies to houses on Volkovycha Street were disrupted due to damaged networks. As a result of the air strike in Zhytomyr, a maternity hospital was left without windows, 10 private houses, a city hospital building and a dormitory were damaged. According to the State Emergency Service of Ukraine, two people were killed and three were injured. There are probably people in the rubble of damaged private houses.

Due to the Russian occupation, Kherson is on the brink of an environmental disaster. At present, Europe’s largest poultry farm, Chornobayivska, is out of electricity, and it is impossible to bring fodder to it. It has three million chickens, which can neither be fed nor disposed of. That is, if the occupiers do not allow to solve this problem, in a few days a plague of birds and a terrible environmental catastrophe will begin. Thousands of residents came out to defend the largest nuclear power plant in Europe, the Zaporizhzhia NPP. On the way to Zaporizhzhya NPP Russian occupants shot at peaceful people who came out to them with Ukrainian flags to prevent them from reaching the nuclear plant. 2 people were wounded. In the village of Vodyanye, two civilians were injured by a grenade from the occupants and hospitalized. The situation in Kharkiv remains difficult, there were shelling of civilian buildings all night, one of the buildings of the Karazin KhNU burned down – it is located next to the Security Service of Ukraine. Emergency rescue operations continues in the administration buildings after the morning enemy rocket attack on Kharkiv. At present, 10 people have been rescued from the rubble. Previously four people were dead, nine were injured. Also a shell of occupiers hit the Assumption Cathedral of Kharkiv, where people were hiding.

As of 2 March, three people had been killed and 22 wounded by Russian troops in Donetsk region. A child was among the injured. During the day, twenty-five civilians suffered. The occupying forces fired on houses, two schools, a bakery, a shop, and public utilities. The enemy attacked 17 locations. According to preliminary reports, at least 36 sites were damaged. The school №46 and the bakery were destroyed in the village of Stary Krym.

The evacuation of people from the cities of Volnovakha, Sartana and Talanivka, where active fighting continues, is especially urgent. After the shelling of Severodonetsk, the roof of the kindergarten was damaged and the heating network was broken. There were about 10 people with children in the basement.

In Mariupol, the Russian military targeted a utility enterprise, a school and a shop in the city centre. At night, a man was killed during the shelling.

A house in Starodubivka was destroyed. The occupying forces also carried out air strikes against the Ugledar community, Zhelannoye, and shelling was also recorded in the Svitlodarsky, Avdiyivsky and Ocheretinsky directions in Kramatorsk.

On 2 March, the world reacted actively to the Russian aggression against Ukraine. Russia is facing economic and political isolation from the international community, which continues to deepen with each passing day.

In particular, it was reported that:.

– ExxonMobil is leaving the oil and gas business in Russia..

– The Boeing Aviation Company stops maintenance, technical support and delivery of components for its aircraft production in Russia.

– Oracle, known as the world’s largest software developer for organizations and a major supplier of server equipment, has suspended its activities in Russia.

– YouTube blocks Russian NTV channels in more than 70 countries, including all over Europe.

– Due to sanctions, Nokia stops supplying network equipment and other components for communication systems in Russia for «MegaFon», MTS, Tele2 and VimpelCom.

It also became known that the EU has disconnected seven Russian banks from SWIFT: “Russia”, “Otkrytie”, “Novikombank”, “Promsvyazbank”, “Sovkombank” and VEB.RF. In addition to disconnecting from SWIFT, the EU further prohibited the sale, supply, transfer and export of euro banknotes to Russia. Japan imposed personal sanctions against Russian President Vladimir Putin, Foreign Minister Sergei Lavrov, Deputy Security Council Chairman Dmitry Medvedev and other Russian politicians and officials. Restrictions have also been imposed on defence and security companies. Canada is imposing additional sanctions on 10 key people from two important companies in Russian energy sector, “Rosneft” and “Gazprom”. In turn, the former President of Lithuania Dalia Gribauskaite called on the North Atlantic Alliance to join the war for Ukraine, which is defending its independence. British Prime Minister Boris Johnson has stated that the actions of the President of the Russian Federation in Ukraine constitute a war crime.

On 2 March, the United Nations General Assembly approved a resolution condemning Russian aggression and demanding that Russia immediately withdraw its troops from Ukraine. This decision was supported by 141 countries, with 35 abstentions. Another five states voted against – Russia, Belarus, North Korea, Eritrea and Syria.

At the same time, the White House has issued a new package of sanctions against Russia and Belarus, in particular: the extension of the strict export control policy established for Russia to Belarus is aimed at preventing the diversion of items, technologies and software through Belarus to Russia; sanctions against the defence sector of Russia – 22 Russian defence enterprises will be included in the list; measures on export control of oil and gas production equipment in Russia; sanctions against structures supporting Russian and Belarusian armed forces, security, military and defence sectors; a ban on Russian aircraft entering and using United States internal airspace.

The world continues to support Ukraine in the military, logistical and technical spheres. Thus, Ukraine received a second batch of Javelin anti-tank missile systems, donated by Estonia, and 1,000 anti-tank weapons and 500 Stinger anti-aircraft missiles from Germany.