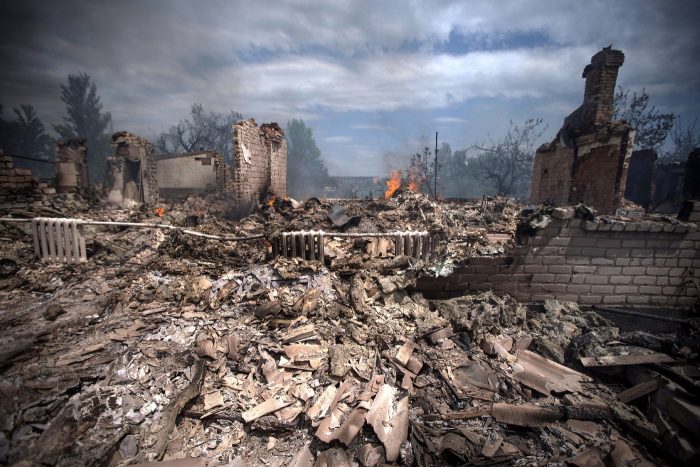 Kherson – many civilians have disappeared (men, women), the occupiers have seized the TV tower and are broadcasting Russian TV channels. The city is short of cash and shops do not accept bank cards. Critical situation with food and medicine. Locals continue to hold peaceful rallies against the Russian occupation, trying to express their own disapproval of the Russian occupiers’ admiration for the city and to attract the attention of the wider community.

According to the Ministry of Energy of Ukraine, as of 18:00 on March 7, more than 742 thousand consumers in Ukraine were left without electricity. This is 1133 settlements in different regions of Ukraine. 238 thousand consumers were left without gas supply. Most de-energized cities are in the Donetsk region. In the Luhansk region, the city of Severodonetsk – 13 residential areas remain without electricity, 60 high-rise buildings and a large number of private homes without gas.

In Mariupol (Donetsk region), the top leadership of the OSCE Special Monitoring Mission has been blocked. One OSCE mission worker died in Kharkiv while handing out humanitarian aid (March 1).

Losses of civilians in Ukraine

As of 8:00 a.m. on March 8, there is no information on the number of civilians killed as a result of air strikes by the Russian army in the cities of Sumy, Okhtyrka and Chernihiv, which took place at night.

Gostomel (Kyiv region) – 3 people were killed by the Russian occupiers: the mayor of Gostomel (when he was distributing bread and medicine to local residents) and 2 volunteers who helped the mayor with humanitarian aid to the residents of Gostomel.

Bucha (Kyiv region) – the mayor of the city is wounded, 2 children died of injuries as the Russian occupiers didn’t give the chance to evacuate the wounded children to children’s hospital.

Kharkiv – 10 civilians were killed in shelling of administrative buildings, a dormitory, residential buildings and one hospital. An artillery shell also hit a supermarket, killing four civilians and wounding about 15. One child was injured, a shrapnel hit a 10-year-old boy in the head while he was in an apartment, as a result of shelling by Russian troops in Kharkiv. One person was injured – a gas service employee who was restoring gas supply in the shelled area of ​​Kharkiv. Two civilians were injured in a shelling of a residential building. The Russian shell hit the educational lyceum – 1 person was killed, children were injured (the number of children is being determined). One employee of the Kharkiv Armored Plant was injured in an air strike.

Zaporizhia region – 2 employees of Ukrposhta were killed. They distributed pensions to residents of several settlements in the Zaporozhye region. A Russian tank fired at Ukrposhta’s car and then moved the car.

Makarov (Kyiv region) – 13 civilians killed and 5 wounded in the shelling of the Makarov bakery by Russian troops.

Vinnytsia – after shelling by the Russian aggressors of the airport in the city of Vinnytsia under blockages rescuers found bodies of 5 civilians.

Irpin (Kyiv region) – 1 woman was injured as a result of the use of firearms by the Russian military..

Rubezhivka (village of Kyiv region) – 2 children were killed in the first days of the war, information was received only on March 7.

Sumy – air strike on apartment buildings on March 7 – the number of victims, including children is being established.

Okhtyrka (Sumy region) – air strike on residential buildings on March 7 – the number of victims, including children is being established.

Chernihiv – several schools, a kindergarten and a multi-storey residential building came under fire. The number of victims is currently unknown.